View source
watch 02:59
Wiki Targeted (Games)
Do you like this video?
Play Sound

The Crank-a-kai (Japanese: 妖怪ガシャ, Yōkai Gasha), capitalized Crank-a-Kai in Yo-kai Watch 3, is a very ancient gashapon machine that is located in Mount Wildwood, appearing throughout almost all of the Yo-kai Watch video games and media.

Inside the Crank-a-kai are capsules that either come in grey, red, blue, gold or black that have Yo-kai or Items imprisoned in them. Putting a Coin inside the slot and turning it will bring out a capsule of randomized color, and opening it will free the Yo-kai or obtain the item that is contained inside.

Throughout the games, the Crank-a-kai is a major feature which acts as the gacha element for the player. In the main series games and some of the spin-off titles, it can only be used several times per day while in some of the other games, it can be used an unlimited amount of times.

Little is known about when or how the Crank-a-kai was created, but the Yo-kai inside the capsules were sealed 190 years ago by a priest and his colleagues, who believed all Yo-kai were evil. It was also said that an innocent Yo-kai was imprisoned along with them.

It was originally locked through a series of barriers on the other side of the Mount Wildwood Shrine, but they were eroded over time, allowing entry to be given, even 60 years into the past.

It is a capsule machine that is situated on top of a moss-covered rock, made out of a stone-like material with a glass window around it. Inside the machine are an infinite amount capsules, which all appear as dark-grey from the outside despite some of them being in colors when they're cranked.

Behind the Crank-a-kai is a tree that is known as the Great Sacred Tree.

By inserting a coin of any kind into the machine, a capsule of a different color will come out of it. In the games, the type of capsule color and Yo-kai or item contained inside vary between the kind of coin used to free it and the odds of getting a prize.

Depending on the game, the Crank-a-kai can only be used a select amount of times per day which will be reset at 6am real-time. In the Yo-kai Watch video game, only three can be used per day, but in newer games such as Yo-kai Watch 1 for Nintendo Switch, the player can use it up to thirty times.

Although, the limited amount of cranks doesn't apply to other spin-off games and mobile titles where it can be used many times. Beginning from Yo-kai Watch 2, tampering with the system clock may temporarily prevent the player from using the Crank-a-kai for a select amount of days.

In Yo-kai Watch 3 and Yo-kai Watch Busters 2, the player has a chance to spin the wheel containing the amount of uses while they have to throw a dart at it. Occasionally landing on a low number may make Jibanyan or Usapyon adjust the total to make it a higher number.

The capsules the Crank-a-kai give out vary in color, which can be a hint to players as to what is sealed inside.

The Crank-a-kai is a prison which holds Yo-kai within it, and the player can free them with various Coins.

In the game, the player can revisit the Crank-a-kai (up to three times per day in the first game) and operate it with special coins, the 8 most common of which come in one color for each Yo-kai tribe, as well as other, more elusive coin types, as well as 10 of the Nintendo 3DS' Play Coins. When inserted and cranked, the Player can then get a variety of items and Yo-kai from the Crank-a-kai. The freed Yo-kai are generally amicable and happy once freed, automatically giving over their Yo-kai Medals in return for freeing them.

The odds to getting a certain Yo-kai from the Crank-a-kai is predetermined every time when a new game is started, and cannot just simply reset and try again if the odds are bad.

In Yo-kai Watch 2, messing with the in-game clock of the Nintendo 3DS may lock the player out of the Crank-a-kai for a few days, depending on how many times the clock was changed in the settings.

In Yo-kai Watch 3, both Crank-a-kai machines (Dream Roulette machine in St. Peanutsburg, and the regular machine in Springdale) show a probability chart, showing the possible Yo-kai or item the player might receive from a single crank. Each day (real life time) starts with a minigame that the player can do, for a chance at up to 30 cranks (on a single day, or they can choose the standard 3 daily cranks). As mentioned, the Dream Medals from the Yo-kai Watch Dream toy can be used as well. When a charged Dream Medal is scanned with the NFC reader, a few gold spots are added to the roulette, giving the player a bit of a higher probability at the gold capsules.

Other Types of Crank-a-kai Machines

This type of Crank-a-kai made it's debut in Yo-kai Watch 2, it appears when the player is in Terror Time, to improve the chances of getting better Yo-kai and items, the player must collect Oni Orbs around the map without getting caught by Gargaros, Ogralus, Orcanos, and the Patroleye, the more orbs the player got, the better the prizes are, in Yo Kai Watch 3 however, there are 10 orbs around, and depending of how many orbs the player has collected, the orbs show what Yo-kai or items are able to be obtained. This Crank-a-kai also appears in Yo-Kai Watch Blasters where the player uses Oni Orbs they have gathered, they than insert the maximum of 10,000 Oni Orbs into the Crank-a-kai.

This Crank-a-kai is exclusive to Yo-kai Watch 2 and is in the Buckebreaker Station. Once there, talk to the Station Spirit and get a Lucky coin once per day. Inside the Crank-a-kai are almost always Rare Yo-kai. The coin is only usable at this station.

This Crank-a-kai is founded in Yo-kai Watch 3 in St. Peanutsburg on the far right where there is a choice to choose to throw a dart or not to, when throwing a dart, there is a chance to get the rare 30 cranks, however if the player gets 2 or less, either Jibanyan (using Paws of Fury) or Usapyon (going to Invader Mode) will change the number of cranks, when a coin is about to be inserted, the screen on the Crank-a-kai may change and a few of gold spots are placed, possibly to increase the chance to get 1st Prize.

In the main series games

The Crank-a-kai makes it's very first appearance in Yo-kai Watch,

In the present day, Nate/Katie is searching for bugs for their collection and come across a gate that mysteriously disappears after a tree is searched for bugs. Now unobstructed, the player moves on and find the Crank-a-kai. They capitulate to the machine after it vocally demands they insert a coin and wind up freeing Whisper, who gives them the Yo-kai Watch as thanks.

In Yo-kai Watch 2, there are now more Crank-a-kai machines available, such as the one at Mt. Wildwood can be accessed in the past, which have exclusive Yo-kai. The number of draws the player is allowed varies from day to day. There are also different contents in the Crank-a-kai depending on whether the player is in the present day or the past.

The Crank-a-kai reappears yet again in Yo-kai Watch 4, with a slightly different function compared to the other games in the series. It now mostly gives out Golden Souls of Yo-kai that are needed to be created in Konkatsu and Arks that are used to unlock rooms with Yo-kai. Like the previous games, the items given from the Crank-a-kai varies on the world that is visited. There are 4 different Crank-a-Kai's in Yo-kai Watch 4 - with an additional one, the Oni Crank-a-Kai, available in ++.

Unlike the other Crank-a-kai's, the Oni one can be cranked infinitely, as there is not a daily restriction of cranks set on this particular machine. In addition, this Crank-a-kai has its own exclusive coins: Oni coins - which can only be used in this specific machine.

It plays a minor role in the storyline, where Nate uses it to find a mysterious key which opens to the future world after lining up in a queue. Along with Nate's world it wouldn't be accessible again until Chapter 3, where they go back to the present to prevent Summer from fading away due to a temporal paradox.

There are four different Crank-a-kai machines found across all four worlds. These four Crank-a-kai's can all be found in Gasha Land :

Rusted, Gasha, One-Star, Five-Star and Special Coins can all be inserted in these 4 Crank-a-kai's.

In the spin-off games

The original Crank-a-Kai doesn’t make an appearance in the game, with the Dream Wheel completely replacing it with the exact same function from Yo-kai Watch 3.

In the anime, the Crank-a-kai appears in Yo-kai are Real! where Nate finds it in a similar fashion to what happens in the video game. He inserts a coin following the instructions of the voice, frees Whisper, and becomes his Yo-kai butler.

Beyond that, the Crank-a-kai is never seen again in regular episodes of the anime, even though it makes a cameo in Katie's Yo-kai Butler, when Whisper asks Katie how he recalls meeting him and in Yo-kai Tie-red, when he temporarily goes back home to his Yo-kai capsule to take a break.

There are some Rare Yo-kai that can only be obtained with the Crank-a-kai, 8 of which are Rank S Yo-kai of their respective tribes, and are necessary to free the Legendary Yo-kai of the Tough tribe, Gilgaros.

In Yo-kai Watch 2, there are 8 more Rank S Rare Yo-kai, with all but one of those being Classic Yo-kai, that are also only obtainable through the Crank-a-kai in the past, and are necessary to free the Legendary Yo-kai of the Slippery tribe, Slurpent.

In Yo-kai Watch 3, there are 8 more Rank S Rare Yo-kai, all Merican Yo-kai that are also only obtainable through the Dream Roulette Crank-a-kai, and are necessary to free the Legendary Yo-kai of the Eerie tribe, Re-Q-Perate. Due to the lack of time travel within, the Yo-kai needed to free Slurpent were moved elsewhere. 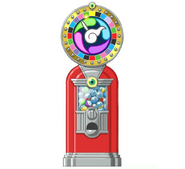 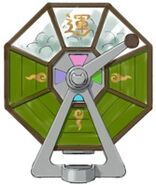 Crank-a-kai From Shin's world, as it appears in Yo-kai Watch 4. 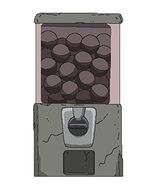 The Original Crank-a-kai from Yo-kai Watch 4