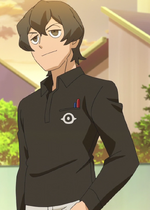 As Ganryuu Shimanouchi, he is a young man with short, black hair, and half-closed, olive-colored eyes (making his face slightly resemble that of Dandoodle from the original series).

He wears a black shirt and light-colored pants. The shirt has a pocket with blue and red pens in it and an eye-like symbol underneath.

As Douketsu, he is mostly black with fiery hair with gradients of purple and violet. Between his orange eyebrows, he has a green amulet. However, this appears as an eye with a green iris and a golden sclera from time to time. He has flowing hair on his arms and a white mane of white hair on his chest, he also has a small and almost unnoticeable tail.

He wears black sack-like pants with white clouds around the bottom and is tied together by a dull gold waistband around them.

Douketsu has been shown to be extremely loyal, following Shutendoji (Shadowside) even when Shutendoji ignored his warnings about Ayame. He is also very rude, being shown to call Akinori a piglet almost every time they encounter each other.

Yo-kai Watch Shadowside: The Return of the Oni King

Douketsu appears briefly in the post-credits scene of Yo-kai Watch Shadowside: The Return of the Oni King, alongside his master, Shutendoji. He notifies Shutendoji about Rasen's defeat and Shutendoji is disappointed that someone named "The Princess" didn't make an appearance. He was holding the Ashura Gouenmaru at the time.

In SS013, it is revealed that Douketsu currently wields one of the five Yoseiken.

In SS014, he monitors Fukurou's fight with the detective agency. After Fukurou's defeat, he attempts to retrieve the Fudou Raimeiken, but not before berating Fukurou for disobeying orders and telling him that both he and Shutendoji have lost faith in him, which results in his despair reaching rock-bottom and causing him to transform into Shinmagunjin Fukurou. He attempts to fight him, but his power is no match for the now monstrous Fukurou. After Fukurou is defeated, he is shown discussing the event with Shutendoji.

In SS021, Douketsu fights against Suzaku in his genjuu form, badly injuring Suzaku.

In SS030, Ganryuu's identity as Douketsu is finally revealed to the detective agency.

In SS037, he follows Shutendoji's plot to steal Touma's Yoseiken so that they can awaken The Princess before Soranaki finds her. Everything seems going according to plan until Soranaki appears and quickly defeats Douketsu and Shutendoji. During the battle, Natsume uses a mysterious power to easily defeat Soranaki.

In the aftermath, Douketsu reverts to Ganryuu and kneels before Natsume alongside Shutendoji. They claim that she is the reincarnation of The Princess that they have been looking for and will follow her orders without hesitation. Despite her refusal to work with them, Ganryuu smiles satisfied because they have finally found The Princess, thinking to himself that this is just the beginning.

In SS038, he is seen walking alongside Natsume and Haruya to the Shirayuki shrine. He and Haruya were later discussing on how Natsume temporally awoke as the princess only due to their barrier.

In SS043, he protected Natsume from victims of the Soranaki virus, only to end up infected himself. Then he battled Shutendoji under the effects of the virus, after they fought, he regained consciousness only to tell Shutendoji to kill him to remove the virus from him. Despite Shutendoji's reluctance, he used Douketsu's Youseiken, and slayed him, removing the virus, but killed him at the same time.

In the post-game, you can find Haruya at the Arihoshi shrine, talking to him can make a quest begin if you choose to accept it. Once you finish the quest, Douketsu will join your team

Retrieved from "https://yokaiwatch.fandom.com/wiki/Douketsu?oldid=229322"
Community content is available under CC-BY-SA unless otherwise noted.