watch 02:45
Wiki Targeted (Games)
Do you like this video?
Play Sound

Hidabat (Japanese: ヒキコウモリ, Hikikōmori) is a Rank D Wind-attribute Yo-kai of the Shady tribe and the Onnen tribe in Yo-kai Watch 4.

Hidabat is a bat yokai with sky blue eyes. Its fur is dark except for a yellow gold collar. He has blue wings with golden-yellow hash symbols on them. Its wings are actually supported on its arms, and its arms move with them thanks to a band on its palms.

Hidabat likes to be in dark and secluded places and is usually seen on a laptop. Hidabat is very shy.

Those who are possessed by Hidabat become gloomy and have a strange need to seclude themselves in the dark.

Hidabat may occasionally appear on the train, and in the Abandoned Tunnel West.

Hidabat is automatically befriended during Chapter 1. 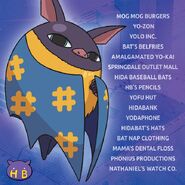 Retrieved from "https://yokaiwatch.fandom.com/wiki/Hidabat?oldid=267144"
Community content is available under CC-BY-SA unless otherwise noted.