Kyubi (Japanese: キュウビ, Kyūbi) is a Rank S, Fire-attribute Yo-kai of the Mysterious tribe, and the Mononoke tribe in Yo-kai Watch 4.

Kyubi is a fox Yo-kai with a rather tall height and is covered in thick, golden fur with white belly and paws. Its chest is covered in a thicker patch of purple fur, surrounded by a yellow "trim" around his shoulders, with four wispy hairs sticking out. Kyubi has nine tails, each tipped purple, and sports long nails of the same color. Its muzzle is long and pointed, like its golden-tipped ears, and on its face are markings resembling a kitsune theatre mask.

He also has a human form which looks lik a young boy about the same age as Nathan. He wears a blue sweater vest over a white shirt and black shorts. He has green eyes and grayish tousled hair, with two strands standing up and nine strands in the back that resembles his nine tails.

Although he is the town's guardian, this Kyubi is a somewhat unpleasant person, being arrogant, serious and cold, but not unjust. While he spoke condescendingly to Nate and Whisper and openly mocked Komasan for his timidness, he reveals after the defeat of Massiface that he is in fact, working to aid Nate and Whisper and hopes that they will be able to stop what was coming. He is also manipulative and openly admits to this, having lured Nate to the Construction Site to pit him against Massiface. In the second game his personality has softened somewhat, though he remains proud and arrogant.

In the anime, only the latter Kyubi appears, initially seen in his own miniseries corner where he's in the process of collecting Heart Orbs. He meets and attempts to charm Katie, but finds himself having great difficulty with it, much to his dismay. When shocked or annoyed, his shapeshift begins to fail; with his ears or tails showing, and in one case he reverted completely to his true form. By the end of his encounters with Katie, he finds that he's actually been charmed by her instead.

In the games, Venoct and Kyubi are treated like opposites. For example, in the second game, Kyubi is part of the Fleshy Souls while Venoct is part of the Bony Spirits. In the Oni update of the second game, Kyubi got a dark form called Darkyubi while Venoct got a light form called Illuminoct. The Crank-a-kai exclusive yo-kai required to unlock Gilgaros that resembles Kyubi, Frostail, is a good, but still proud and arrogant, Yo-kai that brings good luck, while the Yo-kai that looks like Venoct, Shadow Venoct, is a dark, assassin Yo-kai.

In the manga it is shown that he likes to conquer as if it were a game, he also shows an explosive and selfish personality that only saves someone just to conquer him, he is very sustenance to deception as the trick of Shogunyan, he does not think he can be a good friend maybe because he knows he behaves like a child.

In the games, he is Springdale's resident guardian Yo-kai who protects the town and the humans who live there. He once had a shrine dedicated to him near Shopper's Row. When Shopper's Row was expanded in the succeeding decades, his shrine was taken down. Evidently he was not offended by this action, and continued to stay on as the town's guardian.

He is revealed to be the member of the Fleshy Souls.

There is a second Kyubi which appears in a Quest exclusive to Psychic Specters. This Kyubi is a student and still training to become fully-fledged, and as a result he's younger than Springdale's guardian. His subquest involves finding girls for him to charm, and then collect the Heart Orbs that are created by successfully charming them. This quest ultimately requires finding and talking to the majority of female NPCs in Springdale, though Kyubi is quite adept at charming women, two characters prove immune to him.

In his mission in Chapter 11, he can be rarely befriended after clearing said mission.

Kyubi was obtainable through the Crank-a-kai with Y-Money, One Star Coins, Yellow Coins, and Yellow Coin Gs.

Kyubi is befriended as a reward for completing the request The Tall Tail of the Fox Curse! at the Detective Agency, available after completing Chapter 10 and upgrading the Yo-kai Watch to Rank S.

Alternatively he can be freed from the Crank-a-kai with a Legend Coin.

Kyubi, along with Venoct, appears as a daily battle on the beach of the Blasters Base camp upon clearing Chapter 10

In the first game, Kyubi lures Nate/Katie to the construction tower at night. At first, it seems as though Nate/Katie is about to face Kyubi himself, but instead another Yo-kai, Massiface, approaches Nate/Katie to fight them instead. After Massiface is defeated, it turns out that Kyubi was trying to get rid of the giant Boss Yo-kai, and decided to use the player as a way to take care of Massiface.

He later appeared when McKraken's goons started to flood into Uptown Springdale, taking care of a few of them to allow the player the window to create the seal for the Yo-kai Elevator.

In the second game he plays a minor role as one of the Fleshy Souls, and then later appears at the end of the quest to unlock his nightly encounters.

In the third game, he appears in Chapter 6 with Venoct to represent the Elite Yo-kai in the Yopple HQ tour.

In the sequel of the second game, there is a sidequest from a different Kyubi at the base of Excellent Tower, Springdale, which you can get to by taking the subway or using Mirapo's Warp.

In Kyubi: Operation Heartbreak, Kyubi arrives in the human world on a mission to collect the hearts of humans. At this point, Kyubi has already charmed 999 women and only needs one more to become a senior Kyubi. Then, he spots Katie and decides to make her the next target. Over the course of his attempts, however, he ends up falling for Katie.

In Kyubi: Operation Amusement Park, he once again fails to attract Katie.

In The New Yo-kai Watch, Kyubi was seen in Yo-kai-lifornia where he was among the Yo-kai waiting in line for the release of the new Yo-kai Watch Zero.

Nate, Whisper, and Jibanyan formally meet Kyubi in Westward Yo!, where Directator forcibly involves him in his film interpretation of "Journey to the West." Kyubi gives Nate his Yo-kai Medal as part of his introduction.

Kyubi appears in Cool Yo-kai Showdown! alongside Dandoodle after Nate expresses a desire to be popular with girls like a model. After the two popular Yo-kai argue over what characteristics would get Nate noticed by girls, they have a competition in teaching Nate how to gain a girl's affections.

Kyubi is summoned in Yo-kai Watch: The Movie during the final battle, along with the others Yo-kai, fighting against Dame Dedtime and her Wicked servants. He even saved Manjimutt from one of the Wicked, despite burning him in the process, he later revealed to be using his Soultimate move, Inferno, against a Monstrous Dame Dedtime (also known as Dame Demona, and there was a million of them) but the attack was ineffective.

In Yo-kai Grand Prix!, Kyubi teams up with Venoct and Snottle in the Yo-Kar Grand Prix.

Kyubi is summoned in EP129 where he is one of the Yo-kai to impress Zest-a-Minute.

Kyubi debuts in volume 10 in chapter 97, he is the antagonist of the chapter, Save Nate to try to conquer him but fails to see that Nate had a Yo-kai watch blames him for his failure. Kyubi shows that he wants to be popular through conquest and tries to conquer Katie but Nate invokes Shogunyan to fight him. Kyubi had everything contracted but Shogunyan proceeded to possess Katie and the latter ends up defeating him from a not very lethal cut, At first he didn't want to be friends with Nate but Kyubi ended up being conquered by Nate's kindness.

Kyubi is based on a kyūbi-no-kitsune (Japanese: 九尾の狐, kyūbi-no-kitsune) or nine-tailed kitsune (supernaturally-endowed fox). As they grow more powerful with the passing of years, kitsune grow a new tail with each century of age: once they grow their ninth and last tail, their fur will turn white or golden, and their power will reach its maximum. Kyūbi-no-kitsune is gifted with immense wisdom, powerful magic abilities, and can even see and hear everything in the world. They're especially proficient in weaving illusions, and wielding spirit flames called kitsune-bi ("fox fire"). Like tanuki, all kitsune can also shape-shift, though they prefer to take on the appearance of beautiful men and women. 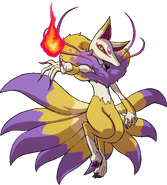 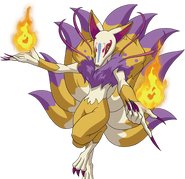 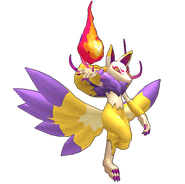 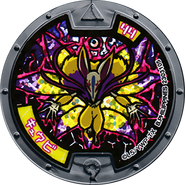 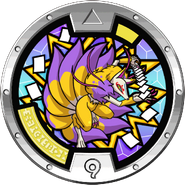 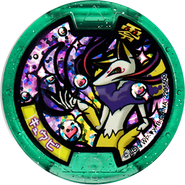 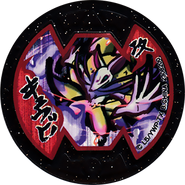 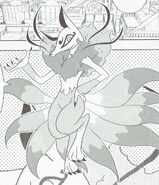 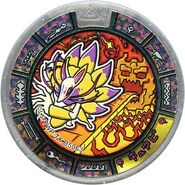 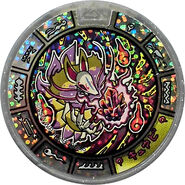 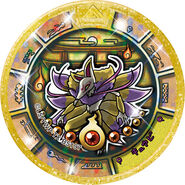 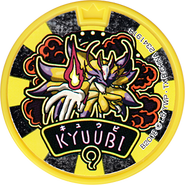 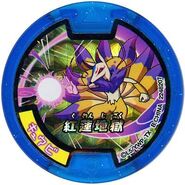 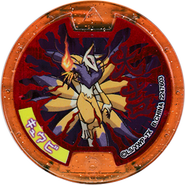 Retrieved from "https://yokaiwatch.fandom.com/wiki/Kyubi?oldid=236367"
Community content is available under CC-BY-SA unless otherwise noted.