"With friends like these, even the past isn't safe!"
—Movie's tagline

Yo-kai Watch: The Movie (Japanese: 映画 妖怪ウォッチ 誕生の秘密だニャン！, Eiga Yōkai Wotchi: Tanjō no Himitsu da-nyan!, Yo-kai Watch the Movie: The Secret of the Creation, Nyan!) is the first theatrical film of the Yo-kai Watch animation series which premiered on December 20, 2014 in Japan and October 15, 2016 across select theaters in the United States.

The plot involves Nathan Adams, Jibanyan and Whisper going back in time to stop the cause of the Yo-kai Watch's expected disappearance in the present, and finds his grandfather Nathaniel Adams, who is shown to be the inventor of the Yo-kai Watch Model Zero. It's heavily based on the story of Yo-kai Watch 2, with some elements taken from Psychic Specters.

Nate, Whisper, and Jibanyan travel to the past to help Nathaniel and Hovernyan create the Yo-kai Watch when dark forces conspire to undo the history of the watch.

When the evil Kin and Gin steal the Yo-kai Watch from Nate Adams one night to help their master Dame Dedtime prevent humans and Yo-kai from being friends, Nate finds help in the Yo-kai Hovernyan who takes Nate, Whisper, and Jibanyan back in time 60 years to when the Yo-kai Watch was first invented by Nate's own grandfather, Nathaniel while he was a kid. Together, the two boys fight Dame Dedtime and her evil Wicked Yo-kai minions to save the world from her evil plans.

Differences Between the video game and movie adaption

As Yo-kai Watch was at the height of it's popularity in Japan, several brands collaborated with the movie for it's promotion.

From October 29, 2014, select McDonald's fast food chains in Japan were temporarily transformed into real life Nom Burger restaurants for a limited time, with Yo-kai appearing all over the decorations and a unique Mog Burger-themed Quarter Pounder being served.

In November, Japanese pizza chain Pizza-La did a collaboration, where ordering a "Eiga Yo-kai Watch Special Pack" with a medium or large-sized pizza came with two unique plates and a sticker set featuring some of the Yo-kai from the movie.[1]

A manga adaption of the film, illustrated by Noriyuki Konishi, was released in December 2014.

In select theaters across the United States, Fathom Events decided to bring the movie for a one-day-only event on October 15, 2016. People who attended it got a free Hovernyan Medal.

In France, The Yo-kai Watch movie had a theatrical nationwide release with previews at selected locations on August 6, 2017 and across cinemas on August 9, 2017. People who attended the event were given a Hovernyan Yo-motion Medal and a paper Jibanyan visor.

The film currently holds an 80% Fresh rating on Rotten Tomatoes based on five critic reviews.

The film set a new record for Toho for advance ticket sales, with 721,422 sold by October 26, reaching 840,000 by late November and more than 1 million by mid-December.

The movie has won two awards at the Japan Movie Critics 2015, with the film itself winning in the Best Family Work category and Etsuko Kozakura for the award of the Best Voice Actress. [2][3]

The film was theatrically released in Japan on December 20, 2014. In the United States, the film was released as a one day-only event at select cinemas across the country on October 15, 2016.

The movie was released on DVD and Blu-ray on July 8, 2015 in Japan. The first-made sets comes with three different Z Medals of Hovernyan (with the regular one and the Moxie pose) and Darknyan. The Blu-ray version includes a pamphlet styled after Nathaniel's notebook.

The movie was released on DVD and Blu-Ray in France on December 9, 2017. The first-made Blu-Ray sets were created in steelbook form, while the limited-edition DVD sets included a 48-page preview of the Yo-kai Watch manga, two wristwatches, and a Komajiro S Yo-motion Medal.

In the United States and Canada, the movie was released digitally on Netflix on December 1, 2016. 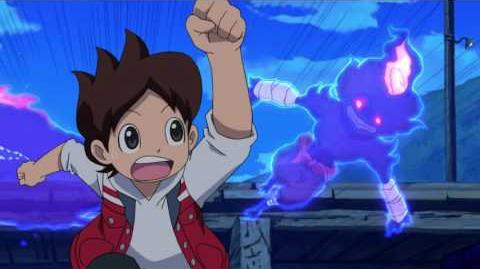 In The English Dub


Cite error: <ref> tags exist, but no <references/> tag was found
Retrieved from "https://yokaiwatch.fandom.com/wiki/M01?oldid=228596"
Community content is available under CC-BY-SA unless otherwise noted.