Next HarMEOWny (Japanese: ニャーKB, NyaKB) is a fictitious girl group that appears throughout the Yo-kai Watch franchise. This group is known to have twelve members, with a few of them appearing in games and episodes of the anime series.

Jibanyan is heavily known to like Next HarMEOWny, and usually either goes to concerts or buys various merchandise from it.

Next HarMEOWny's members are entirely young girls dressed in pink cat-themed attire, which was created by Mr. Nyasushi Nyakimoto. When the group was founded, they originally had blue clothing with slightly different outfits, with them being categorized as the "1st Generation".

There are known to be twelve current members of the group, with five of them originally first appearing in the Yo-kai Watch anime series and Yo-kai Watch 2, and the other seven members that appear in the Idol Wa Ooh-Nya-Nya No Ken song that are of AKB48 idol members in the song which also appear in Yo-kai Watch: Wibble Wobble as Icons.

In Sparkopolis, they have a Next HarMEOWny theater where live performances of the group itself are sometimes held. Merchandise is also sold inside the store's shop at high prices.

Among the members of their fan club, Jibanyan stands out for being one of the few who to have a single-digit number, 00007. A fact which he's complimented on by the Classic Yo-kai Boyclops, Pallysol, and Lady Longnek, who are also members of the fan club, only with numbers compassed by more digits.

Jibanyan struggles to obtain all the merchandising of Next HarMEOWny, such as wall posters and even some pinup magazines, and hopes to get some petting from them, specially from the leading member Fiona.

His admiration from them is so high, he usually gets distressed when announcements like the group splitting up (even though the Yo-kai Failian was behind the effects) or when the group was changing their theme to dogs (which was an April Fool's day prank).

Next HarMEOWny first appears in Katie's Secret, where it is revealed that Jibanyan is a fan of the group.

In Are They Really Cool?, Jibanyan wanted to tell Pallysol, Lady Longnek and Boyclops about his love for Next HarMEOWny, to the point of showing his fanclub card to the Classic Yo-kai. It also turns out that the trio were fans of the girl group, even having fanclub cards of their own. Jibanyan also offered the trio some tickets to their concert and as they accept the offer, the trio and Jibanyan leave Nate's room, while Nate and Whisper look puzzled.

Fiona, the leader of the Next HarMEOWny, had a minor role in Yo-kai Snottle. Jibanyan, after an attempt to rescue a little girl from getting hit by a truck by scarifying his place in line, became depressed and sat alone on the beach during a sunset. The little girl, who turns out to be Fiona’s little sister, told her about a “pretty red kitty” flew in the air to catch the balloon she was chasing to give back to her. She noticed that it was Jibanyan nearby and informed her big sister.

Fiona approached the cat Yo-kai, much to his surprise that she can see him, which the older girl explained that her family line can see Yo-kai. She then proceeded to thank him for helping her little sister with a kiss, much to Jibanyan’s dream come true. Unfortunately, Jibanyan never received his kiss from his favorite idol when Nate summoned him in the middle of encountering Snottle. leaving Fiona bewildered at his sudden disappearance.

In Yo-kai Pandanoko, two of the members of the Next HarMEOWny, Julia and Petunia, saw Pandanoko and immediately takes a liking to her appearance. They both recruited Pandanoko for their next performance as a collaboration to appeal to both the crowd of Panda and Noko lovers, and also invited her to join the group on their bus tours. This helped the snake Yo-kai ease his decision into what she should become.

In Usapyon Is Here!, Jibanyan mentioned that there is an upcoming live-action film of Sailor Cuties, with the actresses being members of Next HarMEOWny after he was able to get the last figurine of Sailor Piaheart.

In EP093, Fiona and her fellow members made a cameo appearance wearing their Halloween-themed cat dresses for the “Next HarMEOWny Special Halloween Concert”. After the performance, she shook the hands of her fans and even the Yo-kai, much to the excitement of Jibanyan, Chimpanyan, Puppynyan, and Pheasanyan who attended the concert.

In EP186, Tomnyan, Whisper, Nathan Adams, travel through Urnfulfilled‘s dimension in his belly hole to find Jibanyan's Next HarMEOWny single CD. As Nate tries to avoid getting the Robonyan F spaceship destroyed, he decides to destroy the single CD, leaving Jibanyan sad.

Next HarMEOWny first appears in Yo-kai Watch 2, in the form of cameos and a few nods of acknowledgement from various characters and NPCs.

There are ten collectable Next HarMEOWny pictures to be found, with eight of them consisting of the four members (with the exception of Fiona) either wearing their regular pink attire or alternative outfit with a blue-and-white color scheme.

They're either obtained from the Lottery or from certain Quests which will award the player with it upon completion. Once all nine pictures of the Next HarMEOWny cards have been collected, Jibanyan will be in the protagonist's home and he’ll express his excitement that the person has been collecting cards of his favorite pop idols and he’ll come to the assumption that it is being done as a surprise gift for him. Jibanyan holds the last card, expressing that its “super-rare” but not his favorite among the sets. He’s willing to trade it for all of cards the player has and will be given the option to do so.

If the player chooses to trade, this will make Jibanyan happy and he’ll swap all of the cards for the final one containing a picture of a man named Nyasushi Nyakimoto. A bronze Trophy titled “Superfan” wil also be earned. However, if the trade is declined, Jibanyan will be greatly saddened and the player will have to wait till the next day in real-time. In order to get another chance to earn the trophy, make sure the game is saved afterwards.

There is a Weather application for the Yo-kai Pad called the Next HarMEOWny Weather Watch (Japanese: ニャーKBのにゃんにゃん天気予報, NyaKB no Nyannyan Tenkeyohō), featuring the members commenting on the forecast and advisory on the game's day-and-night cycle. It can be obtained from Jibanyan if he is talked to in the player's bedroom after Chapter 3.

Once a day has gone by, one of the girls will rotate with a report in chronological order before looping back to the first member. There are times the forecast can be predictable while the notifications are generated at random, however, each member has one unique dialogue towards a specific weather condition. The outcome of the weather and notice will affect the game's environment for fish and bug catching, certain events, Yo-kai interactions and battles.

If the Weather application is used in the past, the idol group is replaced with a generic female reporter instead.

They play more of a significant role in the game, with the members finally making a physical appearance as well as the inclusion of Fiona. 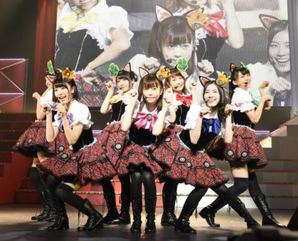 During the 65th NHK Kōhaku Uta Gassen held on December 31st, 2014 at the Tokyo Dome City Hall, they announced that Haruka Shimazaki and their other members members of AKB48, as well as their sub-units SKE48 AND HKT48 would form a subgroup named NyaKB with Tsuchinoko Panda (Japanese: ニャーkb with ツチノコパンダ, NyaKB u~izu Tsuchinoko Panda) to compose the third ending song for the Yo-kai Watch anime series.

Each members of the group were dressed like Next HarMEOWny members seen in the Yo-kai Watch universe, with each of them wearing a unique head ordainment and a clover or a crown.

The ending theme, called Idol Wa Ooh-Nya-Nya No Ken officially debuted in the series in the Japanese airing of EP051, which aired on January 9, 2015 and featured a new group of seven members that made their first appearance before eventually appearing in Yo-kai Watch: Wibble Wobble as Icons. The ending theme was used for 16 episodes, before it was replaced with Yo-kai Taiso Dai-ni.

The group is composed by:

Retrieved from "https://yokaiwatch.fandom.com/wiki/Next_HarMEOWny?oldid=240257"
Community content is available under CC-BY-SA unless otherwise noted.