Pandanoko (Japanese: ツチノコパンダ, Tsuchinoko Panda) is a Rank A Ice-attribute Rare Yo-kai of the Slippery tribe.

A white and dark gray snake. It has pale blue and black eyes with dark gray markings and a pink blushing cheek at the lower corner. On the top of its head is a dark gray flower-shape with lighter gray and white. At the end of its tail is a tiny light pink heart. 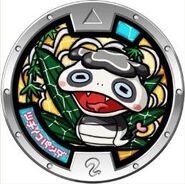 Yo-kai Medal (Japanese)
Add a photo to this gallery

When she is first introduced, she is very unsure if she should be a Noko or a Panda, and this leads to ask Nate and his friends about what he should be. Pandanoko finally reaches a decision upon being invited by the idol group Next HarMEOWny to make a collaboration with her, and this helps her reaching stardom. After that, she develops a somewhat cocky celebrity-like personality and bluntly dismisses Jibanyan's attempts to cash in on her claim to fame.

Anyone Inspirited by Pandanoko gains the ability to make decisions that bring them good luck and fortune.

In EP072, Pandanoko defeats No-Go Kart by using its Black and White Beam to force the wheeled Yo-Kai and Nate's father to make black-and-white decisions.

She is one of the few Yo-kai that can be seen without using the Yo-kai Watch.

Pandanoko has a rare chance of appearing via Streetpass in the VIP Room of the Wayfarer Manor, which is unlocked after meeting at least 10 people through this feature. It can only be fought once until the next chance, but it's possible to save right before and try again if befriending fails. Since it appears at a very low level, a team with three low-level Yo-kai in the front is recommended.

Pandanoko can be randomly appearing in any patrol during wireless.

Pandanoko appears in Yo-kai Pandanoko, undergoing an identity crisis due to the ongoing popular trends of pandas and Noko. Unable to decide which of the two she identifies with more, she asks Nate and his friends about what he should be. Under the advice of Whisper, Nate brings Pandanoko to visit both the panda and Noko fan clubs. However, Pandanoko enjoys both experiences and remains unable to make a decision. By chance, the group passes by a Next HarMEOWny rehearsal, and the singers decide to make her their new mascot after finding her cute. Pandanoko goes on to perform in a collaboration concert with Next HarMEOWny, much to Jibanyan's dismay and envy.

Pandanoko is first summoned in Yo-kai No-Go Kart, for helping Nate's family to reach a destination and dispel the effects of No-Go Kart's powers.