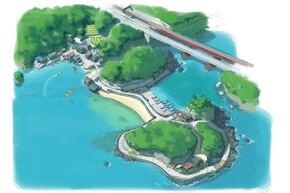 It is a port-like town with docks, that is visited in the second game for a story quest. It is the smallest town in the game - it doesn't have any sub-areas and even lacks a school. It can only be accessed by boarding the Central Line on the railway system. A Baffle Board of Chummer appears near the station as well.

There is a cave filled with water of which the level can be changed, and Baffle Boards for The Dancing Trio. A hidden workshop is also found here.

The Deserted house is probably the most interesting thing in this area: in Psychic Specters, one can enter this house for an exclusive dungeon named Mystery Way, after one or both other versions of the game are linked.

There is also a fisherman with a quest in the second game, and after completing that quest, (which is to catch three certain fish types) the player may use his boat to get to open sea and catch fish types that were otherwise not obtainable. All this provided that the player has obtained a fishing rod.

In Yo-kai Watch 3, during Hailey anne's A Ghost Club Odyssey request, she alongside Zoey and Lina visit this place to seek the truth about a legend of the same name. Other than this quest however, Dragon Palace has no real, meaningful use.

San Fantastico becomes accessible starting at Chapter 6 of the main story, in which the player is required to complete the Find Mermaidyn! quest (alongside four others) to progress further. Mermaidyn is located inside Seabreeze Cave for this reason.

Like Harrisville, this town makes a return in the third game, where it is an optional area. It retains most of it's features and sub-areas, but Mystery Way is no longer accessible. Dragon Palace is a new area situated inside Seabreeze Cave and inhabited by Princess Pearl.

Like most other maps from Yo-kai Watch 2, San Fantastico is visited for several missions.

The town's Japanese name, Nagisaki, is derived from the Nagasaki Prefecture, as well as the real-life city of the same name. Though, San Fantastico's structure doesn't resemble a city at all and is better placed in a quieter, rural part of the area.