Extreme Critical
Heart of a Warrior

Shogunyan (Japanese: ブシニャン, Bushinyan) is an Rank S, Wind-attribute, Legendary Yo-kai of the Brave tribe and the Goriki tribe as of Yo-kai Watch 4.

Shogunyan is a dull-blue cat with a white face and big, black eyes. He has a tiny, dull, pink nose and gold inner-ear colouring. The tips of his paws are white. He wears a turquoise samurai helmet on his head with a big, gold crescent moon on the centre and accenting of gold and a matching samurai armour suit, an orange sphere attached to a collar, and an orange rope that holds his sword. His tail flames are gold.

Unlike Jibanyan, Shogunyan is dignified but also a bit rash. He speaks in old dialect and ends his sentences with "de gozaru" in the Japanese version. Shogunyan takes his status as a samurai very seriously and hates it when others disrespect him. As seen in the anime, he got furious at Nate and Whisper for not sharing the cake he sliced up and attacked them. When he was young, he honed his skills by slicing up katsuobushi. Since he couldn't find any in the present, he went berserk and sliced people's things. Understandably, this results in him becoming overly hostile in the presence of the Fruitnyans .

Before disappearing or wandering off, Shogunyan bursts into tears after witnessing Nate and Whisper´s friendship and asks them to take care of his descendant Jibanyan.

In the anime, Whisper reveals that Shogunyan is one of Jibanyan's ancestor spirits.

Shogunyan says that he is looking for his ultimate rival. It is turned out that rival is actually Komashura.

Shogunyan is a spectacular sword fighter and, according to the Yo-kai Medallium bio in Yo-kai Watch 2, his "sword [is] so sharp it can even slice [his] description in two!"

As a Legendary Yo-kai, one must befriend/recruit the following Yo-kai first in order to undo his seal.

First debuting in The Legend of Shogunyan, where Shogunyan was summoned when one of Nate's Medallium Seal Pages glowed and the seal on him was broken by his collected medals. Originally appearing as Jibanyan when summoned, he enters the closet (disturbing Hidabat while doing so) and then emerges as the legendary Yo-kai, though he is still believed to be Jibanyan in a disguise upon emerging. Immediately, he shows his ancestral tie to Jibanyan by taking a selfie of himself and reading his descendant's magazines. Following a showcase of his swordsmanship to Nate and Whisper, he is later offended when they do not offer him any of the cake he previously cut in thirds and attacks. Though he comically cuts Whisper in half, Nate's display of worry over his friend's safety touches him and he gives Nate his Medal. He then enters the closet again, bidding them farewell before Jibanyan emerges once again.

He is first summoned in Yo-kai Baku just to give Baku a legendary dream so that Nate's classmates will wake up.

In Shogunyan Wants to Cut Hard Things, he goes on a rampage and slices things due to the fact there were no more of the stuff he likes to slice. Although he did help Buchinyan split back into Jibanyan and Whisper, Whisper ends up crashing into Shogunyan and they become Whisshogun, thus shocking Nate. It is unknown how Shogunyan and Whisper split apart because the episode soon ended.

In Yo-kai Gojidatsujii, Shogunyan, along with other cats Yo-kai, were summoned all together due to Misterr Typoo's power changed the Robonyan F's Dream medal's name to 'Nyan'. Unfortunately, shortly after Misterr Typoo running away for his life, Nate accidentally said that he summoned all of them for nothing, thus unintentionally upsets the cat Yo-kai and this led to them proceed to beat up Nate and Whisper as the episode ends. During this end scene, Shogunyan is one of those Yo-kai who didn't weld a shinai (a type of bamboo-made katana made for practicing kendo.) while beating up Nate and Whisper and in his case, he is seen wielding his sword instead.

Shogunyan appears as a supporting Yo-kai during Episode 2: Jibanyan's Brilliant Strategy, alongside Jibanyan and Robonyan F.

One scene involves Jibanyan as Jetnyan, alongside Robonyan F's help, to push a heavy cart Amy was trying to push, with Shogunyan offering help in spirit, though Jetnyan put too much power into the thrusters, causing the cart to fly through the aisles. Shogunyan helped to clear a blockage on the path Jetnyan and Robonyan F were guiding Amy through.

"Shogunyan" is a portmanteau of shogun and nyan, the Japanese onomatopoeia for a cat's meow.

His Japanese name "Bushinyan" is similar, but instead combines with bushi (Japanese: 武士, "samurai, warrior"). The latter might also be a wordplay on katsuobushi (Japanese: 鰹節, "bonito flakes").

He debuts in Volume 2, Chapter 14, as a ghost where he waited for his descendant Jibanyan to eat Katsuobushi, where he ends up possessing Jibanyan to cut Noway, ends up eating his favorite food, and befriends Nate.

In Volume 4, Makes a cameo in Chapter 27, where Jibanyan tells Suspicioni that Nate has a lot of friends.

In Volume 5, He is invoked by Nate in chapter 39, to fight against Apelican but it is useless since he as a ghost is intagible, then he possessed Jibanyan but he was "Americanized" in a Santa Claus outfit and then defeated Apelican.

In volume 7, in chapter 59, he is invoked by Nate to fight Venoct to save Whisper, where he possesses Jetnyan to defeat Venoct.

In volume 10, chapter 95, he is invoked by Nate to fight against Slicenrice to save Suspicioni.

Also in volume 10, chapter 97, he is summoned by Nate to fight Kyubi where he owns Jibanyan but he cannot move so he owns Whisper but he is defeated by Kyubi, as a trick he owns Katie to beat Kyubi.

In volume 11, in chapter 108, we are told that together The Last Nyanmurai defeated 30,000, He would then be summoned by Nate to reunite with his old friend, Directly in chapter 109, he sees how his friend confronts Horizontail. 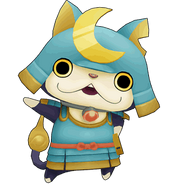 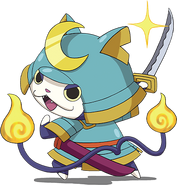 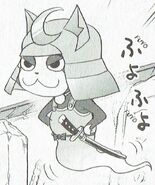 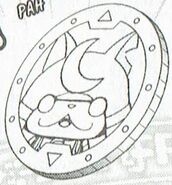 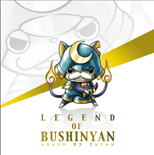 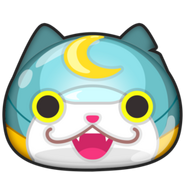 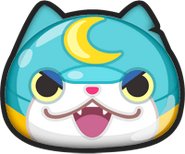 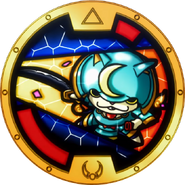 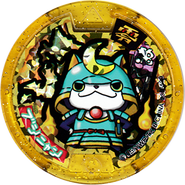 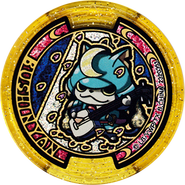 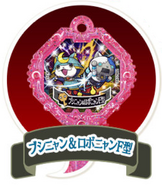 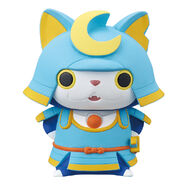 Retrieved from "https://yokaiwatch.fandom.com/wiki/Shogunyan?oldid=236263"
Community content is available under CC-BY-SA unless otherwise noted.