Uptown Springdale (Japanese: さくら住宅街, Sakura Jūtakugai) is a small residential area of Springdale that appears in the Yo-kai Watch games. It's where Nathan Adams and Katie Forester lives, and has several places to visit.

There are four pathways leading to other parts of the town. To the north is Mt. Wildwood, which is located beyond Springdale Elementary. To the west is Blossom Heights, which can be accessed from the northern or southern central road of the area. To the south is Downtown Springdale, and to the east is Breezy Hills, which can be accessed via the southern sidewalk or northern road.

In Yo-kai Watch 4, the entrances to the other locations (except for Mt. Wildwood and Blossom Heights in 4++) have been blocked off, and some of the buildings have become inaccessible.

This area is the residential part of Springdale.

In Yo-kai Watch 3, the house is not accessed at all during the game's storyline and can be visited again after completing it.

The Forester House is located in the eastern part of the area, near the Adams House. If the player decides to play as a girl in Yo-kai Watch and Yo-kai Watch 2, this will be where they reside.

In Yo-kai Watch 3, there is a Baffle Boards found there that is required to be answered to advance the story, and is part of a Key Quest.

The Memory Shop is a place that only appears in Yo-kai Watch 2.

Due to Nate's family moving to St. Peanutsburg, BBQ, Uptown Springdale is instead visited by Hailey in the story first.

Uptown Springdale is again the starting point of the game. Initially, no Treasure Boxes or Ark Doors are present before the place is visited again in Chapter 3 of the story. 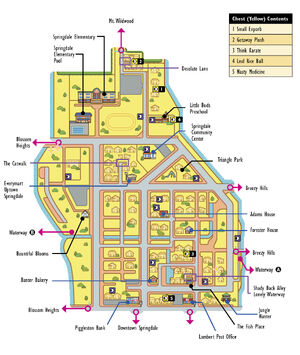 Retrieved from "https://yokaiwatch.fandom.com/wiki/Uptown_Springdale?oldid=256401"
Community content is available under CC-BY-SA unless otherwise noted.