This was the second Yo-kai Watch game to be released on both Nintendo Switch and PlayStation 4 (PS5 included with cross-compatibility); the first was Yo-kai Watch 4.

English and Chinese titles were revealed during the LEVEL5 Special Meeting at Tokyo Game Show 2020. A Traditional & Simplified Chinese localization was announced on November 16, 2020 to be digitally patched into the game by the end of 2020. No English localization has been announced.

A free trial was released for the Nintendo Switch on August 3, 2020.

NOTE: Throughout most of the game, the chapters roughly follow along with the movie (for the first 4 chapters), as well as the anime series. Some chapters/quests take an abridged telling that differs from what happened in the anime, but they follow the same premises.

At the beginning of a new school year, a red-haired boy named Jinpei Jiba races into a prestigious boarding school called Y-Academy, where he starts off his academic life with optimism. His friend, Sandayu Koma meets up with him at the gates, revealing to be best friends in their old school and both go up to the stairs into the main building.

They both suddenly bump into some delinquents, who have been bullying another new student. Jinpei laughs it off at first, much to the bullies' frustration and introduces himself and his friend, Sandayu to them both. Their humorous introductions anger the delinquents even more and turn into a fight, where the boy fearfully witness it happening. When Jinpei declares victory over them, he asks who the boy's name is, revealing to be Mataro Tamada.

Matarou explains that he got into Y Academy due to his extensive knowledge in academics, even studied during cram school and made some friends who were good at studying while Jinpei and Sandayu say that they got in because they had passed their "YSP standards", whom both don't know what the abbreviation means despite Jinpei joking about what it may stand for. A young girl wearing jet-powered boots suddenly disrupts the trio's conversation where she apologizes at first, but Matarou takes a liking to her appearance.

A few hours later, Jinpei, Sandayu and Matarou settle in their new class where the teacher introduces himself as Haruhiko Usumizawa who will be in charge of handling the class and the student dormitory. Jinpei and Sandayu take a liking to the new teacher but suddenly notice Matarou acting nervous in the corner of the classroom. When they go over to Matarou, he said that he saw a mysterious ghostly creature in the entrance ceremony but that creature suddenly reappears behind him who introduces himself as Wampus, where Jinpei thinks of him as an Onryo and decides to fight him with Sandayu.

When Jinpei and Sandayu both beat Wampus, the Onryo suddenly takes a liking to them and decides to join forces while he gives them weapons to fight foes with. Letting out his tiredness about his unexpected chain of events that happened today, Matarou decides to explain about a vision he saw when he was at the school gate of an oncoming meteor to Sandayu and Jinpei but the latter disregards him, much to his frustration.

Suddenly, a member of staff comes into the classroom, where she tries to get the attention of Jinpei and Sandayu where the former recognises her as Natsuki Enra, who is known to be the most beautiful woman in the academy. Jinpei suddenly blushes at her appearance and way of talking, while Enra asks them to visit the infirmary to meet her there. Before Sandayu and Matarou try to change his mind, Jinpei is further enticed by her romantic appearance and rushes over to the infirmary.

Siding With the Gakuen Mafia

The player takes control of a student who has enrolled into a prestigious school called Y-Academy, where it has several missions and activities to offer.

There is a reputation system called Likes, where it is vital for the player to maintain a reputation so they could get rewards like Y-Drops. They can be obtained by fighting enemies in battle or by interacting with them during Events.

Like previous Yo-kai Watch games, the character can engage in action-based battles like Yo-kai Watch 4 and Yo-kai Watch Blasters except that they now happen in real time. Delinquents can be fought on campus, where it can happen at random or making the wrong decision in an Event. Onryo can also be fought, but only via missions or via the Spirit World Channel feature with the YSP Watch.

During the battles, the player can change between equipped weapons where each of them have a different effect. They can also change their Gakuen Job, which will affect their stats and benefited effects obtained by levelling it up. The player can gain Likes from the students watching them, every time the player attacks the enemy or by doing a pose which will temporarily give them increased strength.

For stronger enemies, the player can transform into a Yo-kai Hero which is activated when the gauge is full. They each have attacks that can be changed for stronger variants or different moves that can be found when fighting Onryo.

The official website for the game opened on March 14, 2020, along with the full unveil and announcement date for summer 2020.

By completing various tasks on the Waiwai Open Campus website, users accumulate points which can be spent on special items to obtain in the game.

If the player owns a copy of Yo-kai Watch 4 or its expansion, they can get a bonus item called the Red Enma Blade, which is available to use during battle.

Within the initial digital release of the game, there is a Deluxe Enrollment Set (Japanese: DX入学セット, Derakusu Nyuugaku Setto) that adds some additional extras to the game on the day of release, costing 6,300 yen. The following downloadable content are included in this edition of the game itself:

In the regular edition, the content can be downloaded separately on the Nintendo eShop for 500 yen each.

Five of the seven DLC packs are included with the Deluxe Enrollment Set. Some of them contain playable Yo-kai and costumes of characters from earlier Yo-kai Watch games. The five contained in the Deluxe Admission Set can only be bought once, the other two can be bought a infinite number of times. 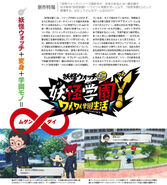