View source
watch 02:52
Roblox: DeepWoken - The Loop
Do you like this video?
Play Sound

This video game is defunct.

Servers for the video game or mobile application have been officially shut down and will not work with any attempts.

The game revolves around a legend which claims that anyone who obtains the Ooja Medal, will be receive powers equal to the great Lord Enma. Players are able be able to immerse in a brand new story in the Yo-kai Watch universe.

In the new game, players will be able to train different Yo-kai to fight in real-time combat and fully customize their avatar. The game will also have AR features to allow players to collect new Yo-kai through taking images.

Yo-kai Watch: Medal Wars was first announced at the Tokyo Game Show 2018, where it would be released in 2019. Originally planned to be released at the end of March 2019, it was instead released as a beta run for Android users from March 28 to April 4, 2019.

The game would eventually come out on July 30, 2019, after many delays. 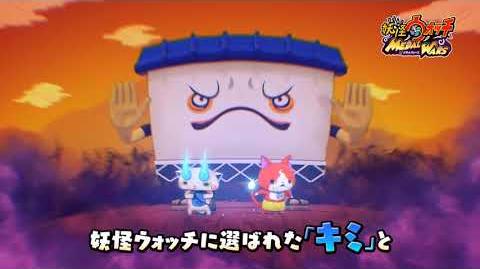