Official Japanese website
Yo-kai Watch 1 Smartphone (Japanese: 妖怪ウォッチ 1 スマホ, Yōkai Wotchi 1 Sumāho) is a port of the Switch version of Yo-kai Watch 1, for iOS and Android systems. It was released on July 10, 2021.

It is an enhanced port of Yo-kai Watch video game, that was originally released for the Nintendo 3DS and later ported to Nintendo Switch, with several control scheme adjustments to fit with the touch screen capability of smartphones.

Though the basis of the game is taken from Yo-kai Watch 1 for Nintendo Switch, several exclusive changes have been made to fit with smartphones;

The game was announced at LEVEL-5 VISION 2016, along with Yo-kai Daijiten and Yo-kai Watch: Gerapo Rhythm, with a 2016 release. Little was known about the port at this time, but was said that it will have improved graphics, controls that utilize the smartphone's touch screen and network compatibility.

It was initially delayed to 2017 due to them wanting to make some "quality improvements"[1], but got delayed to 2018 at the end of the year and eventually to 2019 before the release was removed near the year's end. After over a year and a half without any news, the game was announced to be released in the franchise's eighth anniversary livestream on July 9, 2021, using the Switch version instead of the 3DS version. 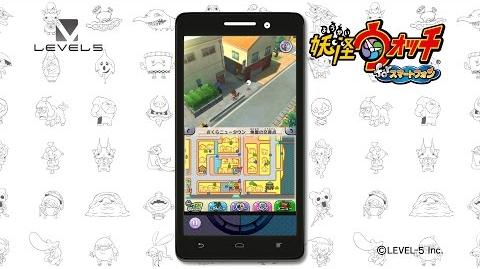 On the date of the game's release, it was #1 on the iOS charts in Japan.