Please improve it as you see fit. Editing help is available.
Reason:June 8, 2018. 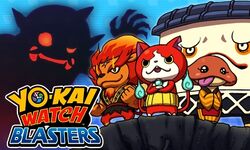 Yo-kai Watch Blasters, or simply Blasters, is a new minigame in Yo-kai Watch 2 that expands on the Terror Time feature of the first game. Terror Time in Yo-kai Watch 2 now functions similar to Blasters as well. The main difference is that instead of being a human, the player can play as any Yo-kai that they have befriended, in a team of up to four players. Each Yo-kai plays a pre-determined role, and there are four roles in total. The player can play Blasters at any time from the Blasters app in their Yo-kai Pad. Each round takes place in a random location from the Yo-kai Watch 2 overworld, where Oni Orbs, items and enemies spawn upon the round beginning. The goal is to collect as many Oni Orbs as possible, while avoiding the patrolling Eye Yo-kai. The best source of Oni Orbs comes from defeating the Oni that spawn on every red clock tick. Players can make use of items to avoid the patrols and to help defeat the Oni. When the last player left standing escapes through the exit door, the total Oni Orbs gathered are complied for a chance the spin the Oni Crank-a-Kai. More Oni Orbs gives the player a better chance to get rare items and Yo-kai.

Once-per-(real-)day, the player can play Oni Misfortunes from the Blasters app to pull a Blasters tag. There are three types of tags: Bronze, Silver, and Gold. When setting up a round of Blasters, the player can choose to use one of these tags for a Bronze, Silver or Gold Adventure course that has a better chance of winning rare items from the Oni Crank-a-Kai if the player succeeds. The player can also play the Normal course at any time that does not require using a tag. Tags can also be found in-game or through the Battle Point Shop. An easy way for a player to acquire Gold Tags is to keep washing their hands at the sink in-game, until a Washogun appears who will drop one if defeated (he cannot be befriended in this encounter). This can be repeated as many times as the player wishes by sleeping in-game.

The Blasters app is unlocked in the Yo-kai Pad after they first experience Terror Time in Yo-kai Watch 2.

Blasters is not playable online. Blasters must be played solo or with another console(s) locally. 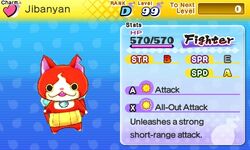 Each Yo-kai has a pre-determined Role assigned to it for Blasters. The four roles are: Fighter, Tank, Healer, and Ranger. As well as this, each Yo-kai has different stats and two moves for playing Blasters: a basic attack with the A button and a special attack by pressing or holding the X button. These stats and moves may not necessarily reflect it's actual stats, moves or attributes. HP in Blasters increases with Level, but whether or not any other stats do is harder to measure. 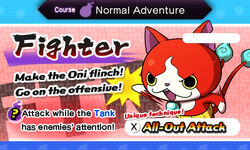 The majority of Yo-kai belong to this Role. The All-Out Attack technique is unique to this Role, and hitting the Oni with it will do high damage as well as stun it for a few seconds. Yo-kai in this Role also have a variety of elemental attacks at their disposal, which include: Fire, Blaze, Torrent, Rapids, Whirlwind, Tornado, Shock, Lightning, Hail, Frost, Pebble, Rockslide, and Drain. Yo-kai in this Role tend to try and deal as much damage to the Oni as quick as possible. 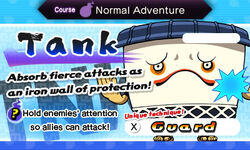 Having the unique Guard technique puts a Yo-kai into this role. While Guard is active, damage taken is decreased and the Oni will focus it's attacks on the Tank. Yo-kai in this role do not have any other moves. The main goal of this role is to support the other Yo-kai in the party by making the Oni target the Tank while soaking up all the damage. Due to this, they are likely to need a Healer at some point. 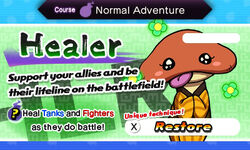 Yo-kai in this Role focus on healing damage done to themselves and other Yo-kai, using one of three different techniques: Restore, Circle Restore and Paradise. Restore heals the HP of any Yo-kai it targets, Circle Restore heals the HP of any Yo-kai within the circle, and Paradise heals more HP than Restore, but takes longer to charge. Yo-kai of this role must be careful to manage their heals for the right time, as they don't want to be charging when they really need to be healing. 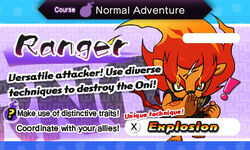 Yo-kai in this role make use of their diverse techniques in order to create alternative methods of fighting the Oni, or to support their teammates with. Their unique technique is Explosion, which places a bomb that can deal damage to any Yo-kai or enemy in it's radius. The bomb is not as powerful as the Blaze Bomb item that spawns during Blasters, however. This Role also has the Strengthen and Heat-Haze Attack techniques. Strengthen will boost the targeted Yo-kai's attack for a short time, while Heat-Haze Attack helps a Yo-kai dodge physical attacks.

Each Yo-kai in Blasters has 2 moves, an "Attack" with the A button and a "Technique" with the X button. Most Yo-kai have a basic attack for the A button, but rarely, some Yo-kai may have it replaced with an elemental attack. Oni can be weak to certain elements.

The main goal of Blasters is to defeat the Oni and earn more Oni Orbs than players may normally. There are three Oni that may spawn during a round of Blasters: Gargaros, Ogralus and Orcanos. Each one is stronger than the last, so powerful Yo-kai and a good strategy is essential to taking them down. Each Oni has slightly different behavior, and may be weak to certain elemental attacks. One Oni will spawn when the round begins, and two more can spawn over the rest of the round, for a chance to defeat 3 Oni each round. Defeating an Oni will drop an Oni Orb worth 50, 100, or 200 orbs, depending on the Oni. The player can earn a Bronze trophy each time the player defeats each Oni for the first time, and a Silver trophy each time the player defeats each Oni 50 times. Collecting 600 Oni Orbs will also earn the player a Silver trophy.

This section is a stub.

You can help Yo-kai Watch Wiki by expanding it. 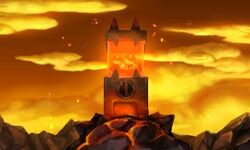 If the player survive Blasters (or Terror Time), their collected Oni Orbs will be absorbed into an Oni Coin the player can use to spin the Oni Crank-a-Kai. If the player were on a team, each team member will get a spin using the full amount of collected orbs. Players who fainted can use only some of the orbs.

Any prize can be received from any course with any amount of orbs, though higher courses and orbs may have a higher chance for rare prizes.

In Yo-kai Watch 2, the Oni Crank-a-kai is the only way to receive the Holy Blade, Ageless Powder, Snowstorm Cloak, and Shard of Evil fusion items for Gleam, Everfore, Chilhuahua, and Beelzebold.

Other Yo-kai that can be cranked are:

Retrieved from "https://yokaiwatch.fandom.com/wiki/Yo-kai_Watch_Blasters_(mode)?oldid=224212"
Community content is available under CC-BY-SA unless otherwise noted.