This page is a candidate for deletion.

If you disagree with its deletion, please explain why at Category talk:Candidates for deletion or improve the page and remove the {{delete}} tag.
Remember to check what links here and the page history before deleting.

Yo-kai Watch Blasters is an expansion on the Blasters gameplay that was first introduced in Yo-kai Watch 2: Bony Spirits and Fleshy Souls as well in Psychic Specters. Four players will face up against other Yo-kai and Boss Yo-kai, which in the game the player will as different Yo-kai and go around town in a beat 'em up action style. Players will team up to form groups of four to take on all Yo-kai, including some bosses. The game series also supports online multiplayer. 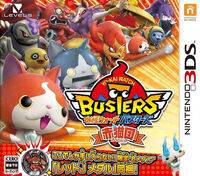 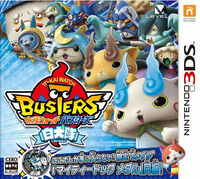 The two games were first announced during the Level-5 Vision as well as the April 2015 issue of the Japanese magazine CoroCoro Comic, which was announced by Level-5 that the game was in development.

Yo-kai Watch Busters: Moon Rabbit Crew (Japanese: 妖怪ウォッチバスターズ 月兎組, Yōkai Wotchi Basutāzu: Getto-gumi) is the third installment as well as an upgrade to the Yo-kai Watch Blasters: Red Cat Corps and White Dog Squad. It was released as an upgrade for the original games on December 12, 2015 in Japan.

The game was revealed during the Japanese magazine CoroCoro Comic, and explains that it is an updated version for the previous Yo-kai Watch Blasters games that has been released earlier in Japan. This update contains Usapyon as the main mascot.

In Yo-kai Watch 3, there is a mode that is called Blasters T or Busters Treasure Mode. You can befriend yo-kai here and deliver it on the main game. In this mode you can get the Secret Legendary Yo-kai and the Deva Yokai.

Yo-kai Watch Blasters is heavily influenced by the american franchise Ghostbusters which contains features from the Yo-kai Watch 2 series.

In Japan when obtaining the physical version of Red Cat Corps, the players will receive a medal for Rubeus J, while obtaining White Dog Squad, the players will receive a medal for Hardy Hound. Usapyon was actually meant to make a debut in Yo-kai Watch 3, which makes the Yo-kai Watch Blasters series his first debut in the Yo-kai Watch video games. Whisper can be used in White Dog Squad as well as his past form, while in Red Cat Corps, Rudy can be used.

Retrieved from "https://yokaiwatch.fandom.com/wiki/Yo-kai_Watch_Blasters_(series)?oldid=252006"
Community content is available under CC-BY-SA unless otherwise noted.