View source
watch 01:54
Arcane: League of Legends - The Loop
Do you like this video?
Play Sound

The series takes place before and after the events of Yo-kai Watch Jam - Yo-kai Academy Y the Movie: Can a Cat be a Hero? serving as a continuation and expansion of the movie. 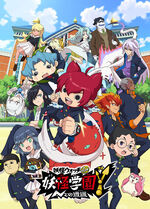 The super elite school Y Academy is shrouded in many mysteries. The "YSP Club" tackles those very mysteries. And not just that, they can also transform into "Yo-kai Heroes". They are entrusted with the mission of solving the greatest mysteries in Yo-kai history. An overly powerful student council, a ruthless disciplinary committee, and even an alien invasion.

What awaits Jinpei and the other "YSP Club" members? A bright future? Or perhaps... Sudden gag overload. Touching developments that’ll move you to tears. A completely new experience is waiting for you. Unravel the biggest mystery of the Y Academy... no, the entire world.

The next stage is a high school!? One day, Jinpei's doppelganger appears and his true identity was a high school student, Lime Ashiya! Not only does he appear to be similar, but he seems to be able to transform into a Yo-kai Hero!?

The Korean dub of Yo-kai Academy Y is currently set to begin airing on Tooniverse on August 3, 2021, following the on-demand release of the movie on July 8, 2021.